Leading up to November 2019 I was preparing work for UndertheCounterCulture (UTCC) with tactileBOSCH. Their call out asked artists to submit work that 'explores and celebrates all aspects of night culture and the counter cultural and non-normative activities that it inspires', to 'shine a light on the value of grass roots night spaces of our urban landscape and their ability to create... platforms for inclusion, connection and presence in a world of increasing hostility and disconnect'.

As a rurally based artist I wondered what my equivalent to this would be...

A repeating theme in my work is exploration of rural/urban connections and disconnections and how economic and psychological processes both flow and create tensions between the two. Mynydd Llangattock caves have been a workplace for me for a decade, in part as a locus of exploration of mythic forces (Orpheus Project) and disruption to contact and communication (GPS Signal Lost). Going under the rural landscape for UTCC I wanted, in company with artists, poets and performers, to try to tap into the kind of primal human energies that still drive people to seek out the Dionysian counter-cultural landscapes of the city, and bring a different perspective to them. 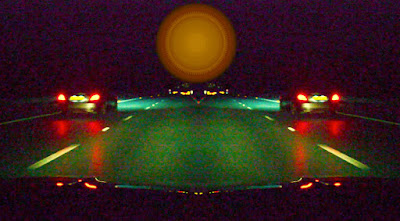 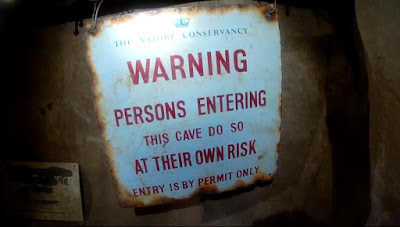 I began with developing video and projection to create a temporary night-club atmosphere underground - a space for something to happen - using clips I had taken aboveground and underground. Dazzling lights of night time driving along road systems that link the Black Mountains with urban centres: the flash of a headtorch picking out elements of the tight confined passages of the locked cave of Agen Allwedd. In the studio I projected the video onto banks of cats’ eyes, and re-video'd this to add layers to what I would use down the cave. 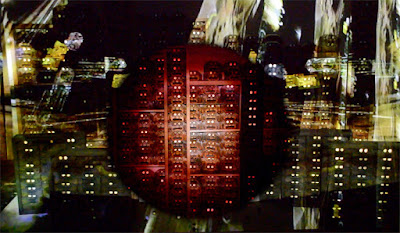 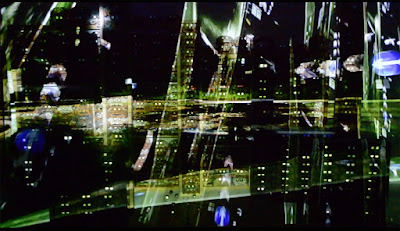 Brake lights, warning signs corresponded with disco lights but also referenced sun, moon, stars, which seemed to fit well with the time of year - moving to winter solstice and dying of the light - and also to a time of environmental and political threat. To amplify themes of connection / disconnection I added images of death I'd observed in the land around the caves. 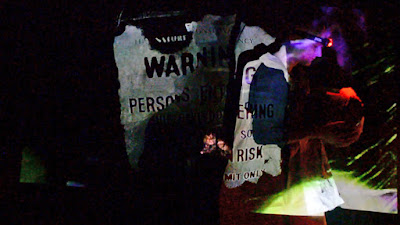 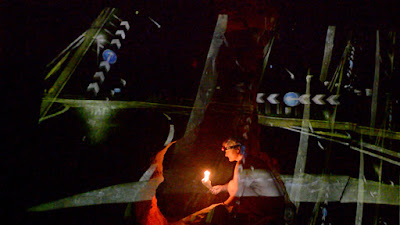 
Tessa created costume, sculptural elements and performance. I projected onto Tessa as she moved in and responded to the cave: she was bathed in images but wasn't able to see what they were. Her body, the objects and lights she used broke into the sequences, making a new work. 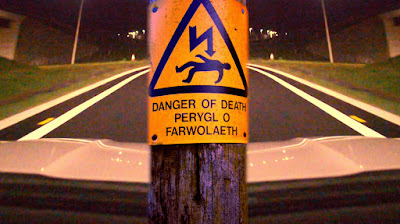 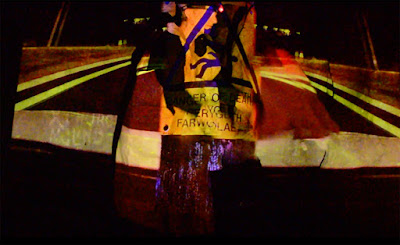 The environment of the cave and tunnels too, brought about accidental effects to create something neither of us could have conceived. 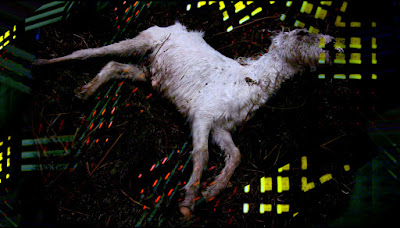 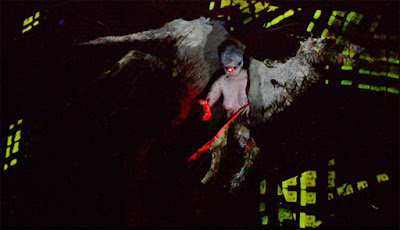 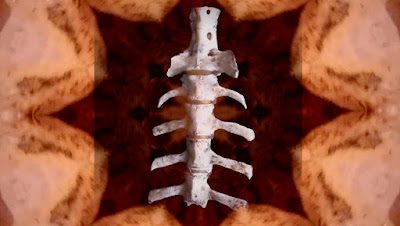 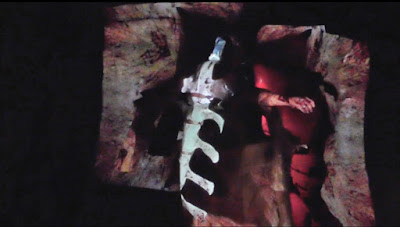 For the final film I cropped 3 hours of material to make a 30 minute sequence, selecting and slowing the speed to emphasise the parts I found most exciting and create an dream-like quality. Apart from this only one minute or so at beginning and end was layered in the editing.


Lyndon, Tessa and I created an environment at tactileBOSCH, in which live performance took place. These brought another level of disruption, destroying one visual experience but also creating something unexpected. 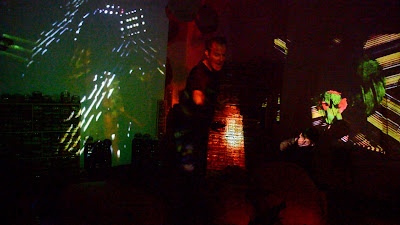 6 November: tactileBOSCH with me, Lyndon and Allen Fisher. 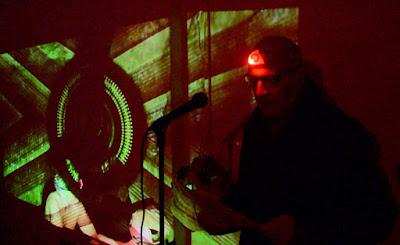 21 February 2020: The MUSE, Brecon, with me, Tessa, Lyndon, John Goodby and Graham Hartill. A new environment, programme and audience brought out different elements in the work. 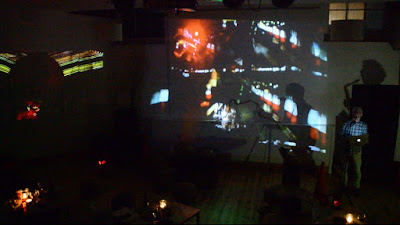 Thanks to Christopher Twig for contributing the following Gary Snyder reference:
Performance is currency in the deep world’s gift economy.  The ‘deep world’ is of course the thousand-million-year old world of rock, soil, water, air, and all living beings, all acting through their roles.  ‘Currency’ is what you pay your debt with. We all receive, every day, the gifts of the Deep World, from the air we breathe to the food we eat.  How do we repay that gift?  Performance. A song for your supper…
The human contribution to the planetary ecology might be our entertaining eccentricity, our skills as musicians and performers, our awe-inspiring dignity as ritualists and solemn ceremonialists — because that is what seems to delight the watching wild world…
Performance is art in motion; in the moment; both enactment and embodiment. This is exactly what nature herself is…’

Thanks to Ursula Frank for her contributions in the cave.
Posted by Penny Hallas at 01:56 No comments: 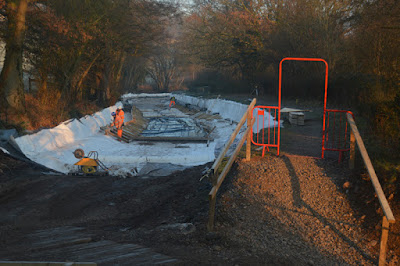 Over the years I've been recording episodes of major repair and renovation on the Monmouthshire and Brecon Canal, including relining of the Llangattock stretch during the winter of 2016/17. 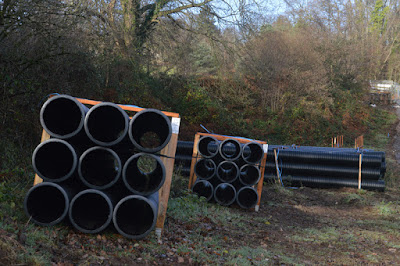 The work involved dredging, pumping, relining in clay and concrete and sinking in massive polypropylene pipes, activities which can sometimes totally transform the appearance and - perhaps temporarily - the entire ecology of a particular stretch of waterway. 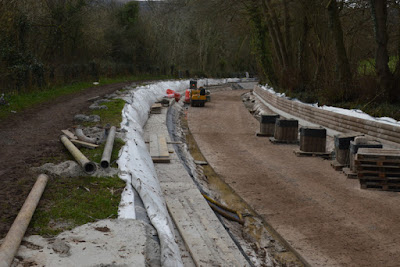 The process of stripping the canal back brings old structures to light, as well as throwing up all manner of artefacts from an earlier era, such as rusty tools and bits of machinery, clay pipes and pottery sherds, as well as more contemporary objects: a mobile phone: a Sabatier knife. These objects often have strong sculptural characteristics and even a ritualistic quality. They seem to breathe history and are powerfully redolent of the people who have lived and worked along the waterways for centuries. 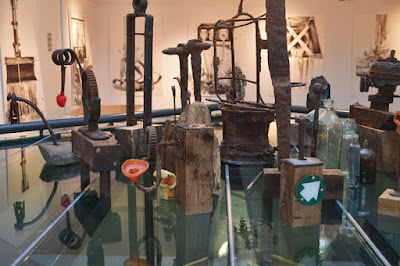 A canal, of course, is mainly about water, and these cycles of rest and upheaval reveal the element in a wealth of different aspects, qualities and behaviours, in differing contexts and subject to differing forms of action and use. There are phases when the canal seems almost natural, an object of timeless bucolic beauty, but in fact it requires almost constant upkeep. 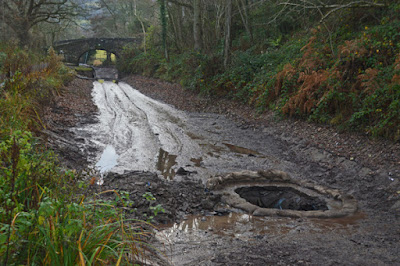 Canalworks drew on all aspects of my art practice: video, drawing, painting, sculptural elements from found objects. It resulted in several bodies of work which explore both natural processes and human activity over time:
Drawing:- Canalworks Drawings and Theatre

Thanks to Monmouthshire and Brecon Canal and Colin Griffiths CPCCivils, Civil Engineering Contractors who gave access permissions and support.
Posted by Penny Hallas at 01:25 No comments: